The Goole Experience
The End of an Era

There were Scholfields living in the parish of Rochdale during the middle ages and the ruins of Scoffeld Hall, dating from the Tudor period, still remain. Later on, their Coat-of-Arms was used by the Schofield family of Sandhall for nearly three hundred years, although the link was never firmly established.

The Sandhall estate lies on a big marshy bend of the River Ouse, about four miles from Howden. The land was purchased in 1725 by John Schofield 1st, (d.1742), who came from Saddleworth in Cheshire. His grandson, John Scholfield 3rd, (1745-1808), married Ellen Worsop of Howden Hall, and built the red-brick manor house in 1776. It stands in 120 acres of parkland and was a perfect example of Georgian architecture until bay windows, a porch and a large extension were added during the next century. The Victorians were very fond of bay windows.

The Scholfields were, without exception, well-educated men who went to Eton and Cambridge. They held a number of different professions and were highly-regarded in the local community. When the banker William Scholfield died in 1854, 1,500 mourners attended his funeral, one of the biggest ever in Howden. He was buried in the family vault, located in the Chapter House, and there is a memorial window to William and his wife in the Minster, on the right-hand side of the west door.

Edward Paget Scholfield, (1877-1967), the eldest son of the barrister Robert Stanley Scholfield, J.P. and Ada Paget of Welton, took over the running of the Sandhall estate after his father's death in 1913. Born in London, he was educated at home by a German governess, Anna Wald, before going to Eton. At Trinity College, Cambridge, he read Agriculture, specialising in land agency. In 1898, he was elected a Justice of the Peace and became a County Councillor in 1916.

During WW1, Mr. Scholfield reached the rank of Captain in the East Yorkshire Yeomanry and later served with the Household Battalion and the Royal Garrison Artillery in France. He was often referred to as Captain Scholfield by local people. His stud groom, Jack Ackney, had been his batman during the war and they had a close relationship. After being wounded, Jack had to have his right arm amputated and used various artificial limbs, but he coped well and still rode to hounds.

In 1920, aged forty-two, Mr. Scholfield married Margaret Eleanor Heber-Percy, (1894-1963), in London. She was directly descended from the Earls and Dukes of Northumberland through her father, Alan Heber-Percy, whose family began to use that name when his father, Algernon Percy, married Emily Heber of Hodnet in Shropshire.

Her mother, Susan Portman, a society beauty, was a grandaughter of 1st Viscount Portman, the liberal M.P., and his wife, Lady Emma Lascelles of Harewood. Margaret Eleanor was born at the family's London residence, 22 Portman Square. Her childhood was spent at Knighton House, on the Portman's country estate near the picture-postcard village of Durweston in Dorset. There, she learned to hunt and became an expert horsewoman.

Mr. and Mrs. Scholfield both came from large families who led interesting lives. His brother Alwyn was a Cambridge professor, and one of his sisters, Evelyn, married Mordaunt Gore-Booth, the director of a steel works near Doncaster. His father was the Arctic explorer, Sir Henry Gore-Booth, who owned the splendid Lissadell estate in Sligo County on the west coast of Ireland.

Hugh Heber-Percy, Mrs. Scholfield’s brother, went to Ludgrove Preparatory School, then Eton, and became a Lieutenant before leaving the army to go farming in South Africa. Her sister Ida lived in Chelsea and travelled widely with their father, Alan Heber-Percy. Both their names appear on first-class passenger lists alongside those of other aristocrats, diplomats and wealthy bankers. One can imagine the glamour of the ocean-liners in the twenties and thirties when the Heber-Percys sailed to New York, Bermuda, the South of France and Indonesia.

In contrast to their cosmopolitan lifestyle, the Scholfields enjoyed the tranquil surroundings of Sandhall. Their position in the village meant that they were actively involved in all aspects of local affairs. Mrs. Scholfield was a Justice of the Peace and used her influence for many years as the Chairman of the Howden Rural District Council. She was on several committees, including the Skelton branch of the W.I., and helped to organise countless jumble sales and whist drives. She became the Chairman of the School Board at Skelton School, (which closed after the war), and her husband always provided a Christmas tree for the children.

At some point, Mrs. Scholfield became a Christian Scientist, believing that illness and physical discomfort are all in the mind and can be alleviated by a healthy lifestyle and prayer, (a reminder that two great-grandfathers were bishops; Hugh Percy, Bishop of Carlisle, and Reginald Heber a Bishop of Calcutta, who wrote some well-known hymns). Her daily routine included a cold bath every morning and when central heating was installed at the Hall, she refused to have a radiator in her bedroom. Although they had a car, she preferred riding a bike and was a familiar sight cycling along the lanes into Howden, rain or shine. When she was older, she went about on a moped. Dressed in sensible country tweeds and thick stockings, she could have been anyone. Real ladies don’t need to impress other people.

The Sandhall estate was a close-knit community, staffed by a cook and five maids, gardeners and stable-hands. The farm workers lived in cottages nearby and at Skelton. There were Sunday cricket matches in the park, and special events, like Coronations, were always celebrated in the village. While his wife concerned herself with domestic affairs and helped with the accounts, Mr. Scholfield ran a successful farming enterprise.

He was the President of the Howdenshire Agricultural Club, a co-operative organisation for farmers who shared the common purpose of improving farming techniques. During his lifetime, the eighteen working horses on the farm were replaced by six tractors, and mechanisation took over from man-power. At Sandhall, the cropping was a straightforward four-course rotation of potatoes, wheat, oats and barley, with some other root vegetables. The livestock consisted of beef animals and occasionally pigs. The Scholfields treated their employees with courtesy and consideration and some of them, like Jack Ackney, received Long Service Medals from the Royal Agricultural Society.

After her marriage, breeding hunters became one of Mrs. Scholfield’s main interests. At one time, she kept fourteen at the stable and rode around the estate, usually accompanied by Jack. Her two daughters, Mary, (b.1921), and Helen, (b.1923), learned to ride in the small paddock near the stable block. At first, they were educated at home by a French governess then went to school at Benenden. During the holidays, they had friends over to play tennis and had little gymkhanas, organised by their mother.

In 1939, when Mary was eighteen, arrangements were made for her to go travelling with her grandfather and his second wife, but she missed the opportunity when war was declared. She went in the R.A.F. and later on joined the code-breaking team at Bletchley Park. Her sister, Helen, became a nurse. The war had an impact on people like the Scholfields who lost the majority of their staff to the war effort, and in post-war Britain a new social order would emerge, bringing an end to the centuries-old way of life.

In 1946, Helen married Roy Baxter, an Australian, and went to live in Sydney. Mary fell in love with her cousin, Colum Gore-Booth, Mordaunt and Evelyn’s son, and they were married at Chelsea in 1947.

Colum was an artist who painted landscapes in the Fauvist style and was the subject of a biography, “The Life and Paintings of Colum Gore-Booth", by A.J. Blytheway. Traditionally, the Gore-Booths had always appreciated the arts and the poet W.B. Yeats often stayed at Lissadell House, the guest of “a very pleasant, kindly, ‘inflammable’ family”. Colum’s Aunt Constance, known as Countess Markievicz after marrying a Polish Count, studied art in Paris and she and her sister Eva became Suffragettes. Both sisters were fiercely political and fought for Irish Independence, when Constance became an M.P.

In 1959, aged forty-five, Colum died at their Kensington home after choking on a fish-bone during dinner. He left Mary to bring up three young children; Peter, (who later called himself Krishna after studying Eastern philosophy), Susan, Justin and another daughter, Tessa Mary Watt.

Mary married her second husband Michael Barker in 1971 and moved to Herefordshire. After his death in 1982, she eventually returned to her ancestral home at Sandhall to live quietly with her memories, surrounded by Colum’s paintings, including his portrait of her. In 2009, aged eighty-eight, she died and was buried in the small Garden of Remembrance near the south-west corner of Howden Minster, not far from her friend and neighbour Dulcie (Ackney) Simister.

Her heir, Peter/Krishna Gore-Booth, wasn’t interested in farming and lived mainly in the Far East, so the entire Sandhall estate was sold in the same year, marking the end of an era. 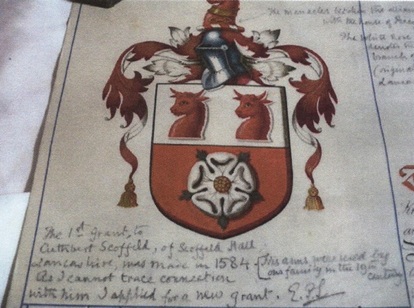 By kind permission of Ann E. Fysh from her book
'Notes on a Small Town'