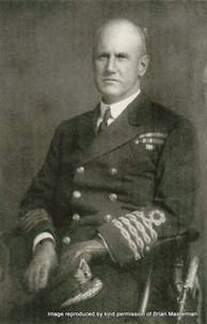 He came to be widely-known as ‘a sailor of the Bulldog breed.’ During his long and highly-successful sea-going career he was honoured on both sides of the Atlantic. For a time he commanded the largest ship in the world. He gave highly-respected evidence at the inquiry into the sinking of the Titanic. And his involvement with ships and the sea began during what he described as ‘a very happy boyhood in Goole.’

This is the story of Bertram Fox Hayes, whose early life in Goole led ultimately to a knighthood and the rank of Commodore with the famous White Star Shipping Line..

Born in Birkenhead in April, 1864, he moved to Goole with his family three years later, when his father, Joseph Barry Hayes became general manger and secretary of Goole Steam Shipping Company. Young Bertram attended school in Goole - at, it is believed, the old Church School - and then, at the age of 14, his first job was as a junior clerk on the staff of Goole Steam Shipping.

But the call of the sea could not be satisfied by a role ashore. So, in 1880, at the age of 16, he joined the crew of the sailing ship Laomeme, at Liverpool, and soon his career flourished. By 1887 he was a second officer, and his second voyage in that rank - aboard the barque Loch Cree - saw him sail from Talachuano in Chile to, of all places, the port of Goole, with a cargo of grain.

In 1898 he joined the White Star Line, and took command of the liner Britannic in 1899. During the Boer War the liner carried 37,000 troops to South Africa and he was subsequently awarded the Transport Medal.

He went on then to command other White Star liners, including the Adriatic. As captain of that ship, in 1912, he brought home from New York members of the Titanic’s crew who had survived the ill-fated liner’s sinking following a collision with an iceberg. Later Bertram Hayes appeared before the Titanic Inquiry conducted by the British Wreck Commission to give evidence about his experiences when negotiating ice fields at sea.

In 1915 he took command of the Titanic’s sister ship, RMS Olympic, and, served aboard her through the remainder of World War I. He had a distinguished war, too, and, as a member of the Royal Naval Reserve, became the first Merchant Navy officer to gain promotion from Captain to Commodore.

During the war, under Bertram Hayes’s command, the Olympic carried more than 200,000 troops, mainly Canadian and American, to the European battlegrounds, and in the process steamed 184,000 miles, consuming 347,000 tons of coal.

Following one wartime incident he was awarded a gold medal after disregarding orders and stopping his ship to save the crew of a French cruiser which had been sunk in the Mediterranean. Then, in the English Channel in May, 1918, his ship rammed and sank an enemy submarine, for which he was subsequently awarded the DSO. Immediately after the war his ship was employed taking Canadian troops back to their homeland, and he received presentations from the people of Toronto and Halifax to acknowledge their appreciation.

Bertram Hayes was knighted in 1920, and in 1922 he took command of the Majestic, at 956ft long then the word’s largest ship. German-built and launched as the Bismarck shortly before the start of World War I, the ship had lain unfinished in dock through the hostilities before being handed over to Britain as war reparations in 1919.

As the Majestic entered service with a crossing of the Atlantic to New York in May, 1922, Sir Bertram was named Commodore of the White Star fleet. He retired in 1924, at the age of 60, after a sea-going career spanning 45 years, and with the reputation of never having had an accident during 25 years in command of White Star liners.

A bachelor, in retirement Sir Bertram Hayes devoted much of his time to the interests of the Merchant Navy. Even in his later years, however, he retained his regard for Goole, his boyhood home, and sent a personal message of congratulations when the town achieved borough status in 1933. He died at his home in Liverpool in 1941.