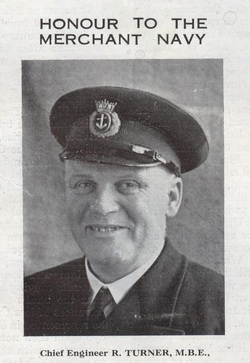 Mr Ralph Turner was a well known local chief engineer, awarded the M.B.E. for meritorious services in the Merchant Navy. He served on the Goole built collier, the S. S. Sanfry, from her launch in 1930.

Involved in many exciting episodes in the coastal and Channel trades since the outbreak of the Second World War, on one occasion his vessel sank an enemy E-boat in the English Channel. The Master of the Sanfry, Captain Lawton, was awarded the M.B.E for this spirited action. Other members of the crew were also officially recognised.

Born in Thorne, Mr Turner came to Goole at the age of six and attended Old Goole Council School. He started his career at the Alum Works and was then apprenticed as an engineer with the Aire and Calder Navigation.


On completing his apprenticeship he went to sea in 1913 as second engineer on the S.S. Hook Road. In 1914 he joined the Ellerman Wilson Line and went deep sea, in the New York, Russia, and Baltic trades.

Mr Turner had a very long service history. During the First World War he spent six months on supply ships at Mudros Bay during the Dardanelles campaign. He then went to Jamaica and later to India via Suez. After contracting typhoid he was left in hospital at Port Said, eventually returning to Goole on a P&O Lines vessel.

After convalescence he worked as a shop foreman fitter for the Ouse Shipbuilding Co. before returning to sea. After various Baltic and Spanish coast voyages he became chief engineer on the locally built collier, S.S. Harfly; transferring to his final ship, the Sanfry in 1930. He came ashore in 1945 to become a marine superintendent for the firm of Messrs. Comben, Longstaffe and Co. Ltd. He was responsible for the successful salvage of the Londonbrook when she sank in Goole Ness.