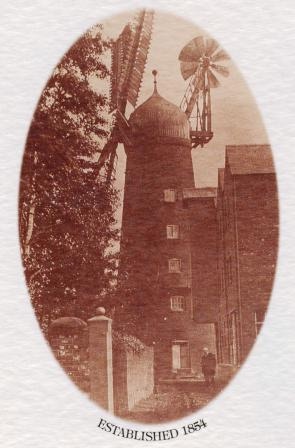 The origins of Timm's Mill can be traced back to the mid-1800's, when Edward Timm rented a five sail windmill and three storey steam mill on Boothferry Road, Goole.  Thus was founded the Goole firm of E. Timm & Son Ltd, flour millers.  By 1868, he had accumulated enough capital to buy the mill and adjoining buildings for £1,500.

The following advertisement had appeared in the Goole and Marshland Gazette in 1854:
TO BE LET ON LEASE FOR A TERM OF YEARS, A SUPERIOR WIND CORN MILL, five stories high, with every requisite complete, together with a newly erected STEAM CORN MILL, three stories high, with all the modern improvements together with a good House, Cottage, Granaries, Stables, Yard, Garden and Orchard, with every convenience for the trade of a Miller, Flour Dealer, etc.  For Rent and other particulars, enquire of Mrs Spilman, on the Premises, Goole Mill.  Immediate Possession.  15 February 1854. 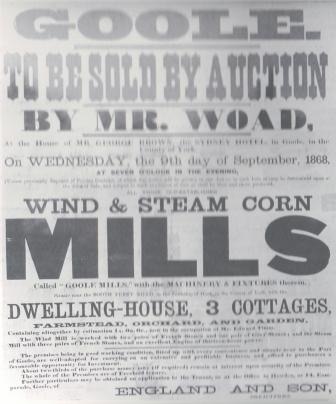 Mr Timm was an astute Yorkshireman, and was always looking for ways of
improving his business.  Whenever milling engineers introduced a new idea, Timms were always among the first to incorporate it into their mill, with production increasing from two sacks per hour in 1854 to 18 sacks per hour in 1939.

Between 1854 and the closure of the firm, the business passed from
generation to generation, passing from the founder, Edward, to his son, John
Brunyee Timm, to his son Claude, down to Mr Reg Timm.