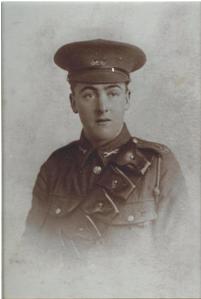 Jack Akney was born in Bielby, near York in 1893 and lived in Everingham with his parents and sister. After leaving school he  worked locally, always with horses.

Around 1913 he moved to Mr E P Scholfield's Sandhall Estate near Howden where he was employed as a groom.

In 1914 both and he and Mr Scholfield enlisted to serve in the First World War with the King's Own Yorkshire Light Infantry (K.O.Y.L.I.) taking with them horses from the Estate.

They went to France where Jack was wounded with shrapnel during the last days of the War. He returned to the Princess Louise Orthopaedic Hospital in Chailey, Sussex where he was fitted with an artificial right arm. He was discharged on 21st November 1918.

On leaving the Army he returned to work at Sandhall, still as a  groom, and coped with his artificial arm, using a hook. He rode to hounds and never let his disability prevent him from doing most everyday tasks. In 1922 he married May and they had 4 children between 1924 and 1936.

He lived and remained on Sandhall Estate until his death in 1983, just short of his 90th birthday.