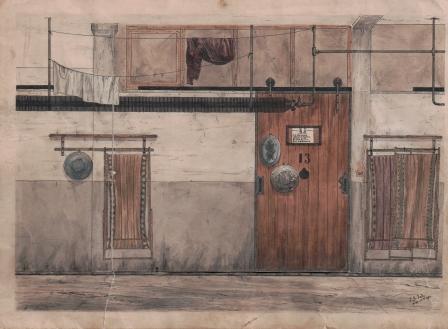 During the early part of WWI, thousands of British civilians and merchant seamen were interned at the Concentration Camp for British Civilian Prisoners of War, which was situated at Ruhleben racecourse, near Berlin, Germany.  Amongst these men were many who had connections with Goole:

James ASKEW, of 26 Wesley Square, Goole, was a seaman on board the S.S. Edwin Hunter;

George Noel HESLOP, of 3 Widop Street, Goole, was a sailor on the S.S. Edwin Hunter;

William Edwin HUNTER, of Claughton House, Goole, was an engineer;

The S.S. Edwin Hunter was interned for a total of four and a half years in Germany, having unfortunately been in Kiel, Germany at the start of the war..  According to The Thames Star newspaper, the crew received full pay for the whole period of the ship's captivity when they left Goole on the ship's first post-war voyage on 14th April 1919.

Most of the internees never saw freedom from Ruhleben Camp until the end of the war, but the conditions which they created for themselves enabled them to maintain a unique way of life during their internment.

Our Museum houses a small selection of fascinating artefacts from the camp, including a three-dimensional painting of one of the barracks, painted by J.A. Job in 1916, and a copy of the Ruhleben Camp Magazine.  The following names and information are transcribed from these artefacts.

Names featured in a 1915 edition of the Camp Magazine:

A. Healey HISLOP - his artwork is featured in the magazine;

E.S. DAGNALL of the SS Nicoya - Member of the Dramatic Society. 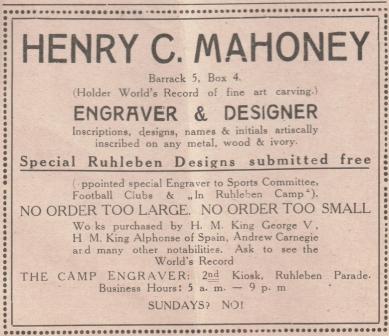 A classified ad featured in the magazine:  "Wanted by a member of the Summer House - respectable young man to fan him during the summer months and fetch his relief money."!!!