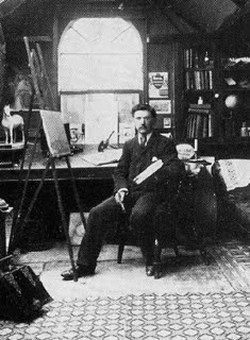 Jackson Street Studio
Reuben Chappell was born on 21 July 1870 in Doyle Street Goole, one of six children. He was apprenticed to a Goole photographer, but his early success selling sketches to local papers and pictures of ships to sailors who frequented the port encouraged him to set up as a ship portraitist. He acquired a studio in Jackson Street, and by 1890 was supporting his family by his painting. The studio was one of the few buildings in Goole destroyed by enemy action during the Second World War.

As the ships docked at Goole, Chappell would be on the quayside seeking commissions. Once successful, he would sketch the ship, finishing the portrait in his studio, conveniently close to the docks, before the vessel sailed on the following tide.

His charges were modest - five shillings for a water colour, thirty for an oil portrait -but he managed to support his wife Caroline and their three sons solely by his painting.

Always prone to bronchitis, Chappell left the cold and damp of the Humber in 1904, and settled at Par, Cornwall, in the hopes that the warmer sea air would help his chronic lung problems. This was not a random choice; many of his Goole clients were Danes, and Danish ships were heavily involved in the china clay trade out of Par. Although he is known solely for his output of ship portraits, Chappell very much enjoyed painting landscapes whenever he had the opportunity to do so.

Despite suffering a mild stroke in 1924, which affected his sight, Chappell continued working. He died at Par on 20 July 1940 of bronchial pneumonia.