In the early hours of the morning, with most people in bed and Boothferry Road School unoccupied, Hampden X2908 of 50 Squadron crashed in ﬂames in Dunhill Road, not far from the school. With a crew of four, the twin-engine medium bomber had left RAF Lindholme on a mission over enemy territory. Three of the crew were killed in the crash but the wireless operator, though injured, was rescued by Edwin Fred Richardson (28), of Dunhill Road, helped by Pc Alfred Ernest Dunn (29), a clerk at Goole Police Station. Both men were said to have shown a disregard for their own safety, facing the danger of exploding bombs and ammunition. Mr Richardson, a carpenter at Goole Shipyard and a part-time fireman, had already clambered under the blazing wreckage when Pc Dunn went to his assistance. Three times they were driven back by exploding ammunition. Seeking to reach other crew members after the rescue of the wireless operator, they were ﬁnally forced to abandon the rescue attempt by intense heat. Mr Richardson was subsequently awarded an BEM. An eye-witness at the time of the incident said of Mr Richardson, “If ever a man deserved a medal for what he did, it was him.” Pc Dunn was also honoured.
By kind permission  of Mike Marsh from his book Goole at War
​

By kind permission of Brian Rapier & Richard Allenby
Hampden X2908 in Goole.
On the night of 15th / 16th November 1940 50 Squadron were tasked with bombing various targets in Hamburg. The squadron's aircraft took off from between 18.00hrs on 15th November to 02.00hrs on 16th November with this aircraft specific listed as taking off at 01.15hrs on 16th November; it was one of the last to take off from Lindholme. This crew were tasked with bombing the Altona Power Station near Hamburg, Germany. On their return to England the aircraft ran out of fuel and crashed on Dunhill Road in Goole close to the junction of Boothferry Road at 07.07hrs on 16th November 1940. Three of the crew were sadly killed but one remarkably escaped with only minor injuries. Twenty eight year old fireman John Freer Richardson was later awarded the BEM for his actions on this night in attempting to rescue the crew of this aircraft, notification of his award was printed in the London Gazette on 4th April 1941 and in the same notification as a farmer from Leeming who attempted to rescue a pilot of crashed Spitfire X4423 at Hackforth (detailed on this website). Their citations were the same and read.. "For gallant conduct when attempting to rescue the occupants of aircraft which crashed and caught fire. These men faced the danger of exploding bombs and ammunition with complete disregard of their personal safety." Twenty nine year old police constable Alfred Ernest Dunn was also commended for brave conduct following the rescue operation and notification of this commendation was also printed in the same London Gazette. 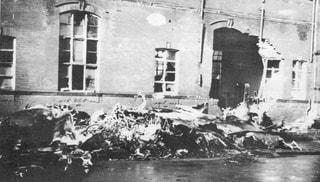 By kind permission of Credit Brian Rapier & Richard Allenby
This photograph depicts the crash scene. The building in the background was repaired and is currently used by "The Courtyard". The only signs on the outside of the building today is a less-fancy window ledge on one of the larger windows.
Pilot - Sgt Colin Richardson RAF (529564), aged 23, of Woodlands, Doncaster. Buried Adwick le Street Cemetery, Doncaster, Yorkshire.
Second Pilot - Sgt Birt Brookes RAFVR (745413), aged 27, of Brighton. Buried Brighton and Preston Cemetery, Sussex.
​ Wireless Operator / Air Gunner - Sgt Charles William Ian Parker RAFVR (904426), aged 19, of Rottingdean, Brighton. Buried Rottingdean Churchyard, Sussex.
Wireless Operator / Air Gunner - Sgt J Anderson. Minor injuries.
Birt Brookes attended Varndean Grammer School, Brighton from 1928 to 1933 and left school at sixteen, for the next five years was a clerk in the Brighton Town Clerks Department. He joined the RAFVR in 1938 and was called up the following year.
Nothing is known about the other three members of this crew.
Hampden X2908 had a brief history, it was built to contract B.994449/39 by E.E.C. Ltd, at Salmesbury and was awaiting collection in July 1940. After a period of MU storage the aircraft was taken on charge by 50 Squadron at Lindholme during the last week of September 1940. Cat.W/FB was declared following the accident in Goole in November 1940. 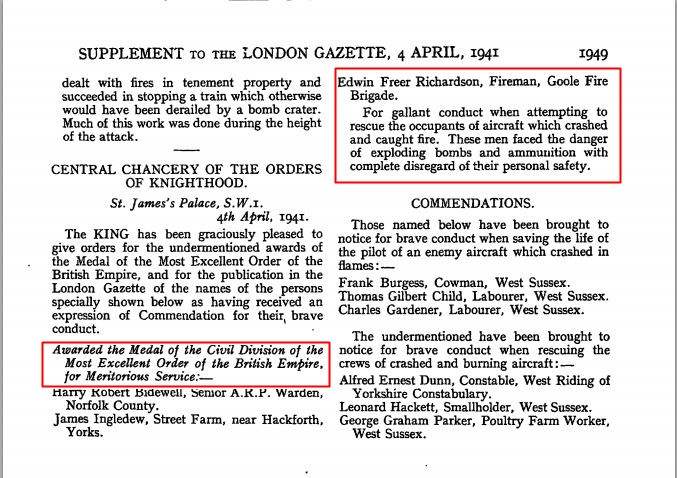 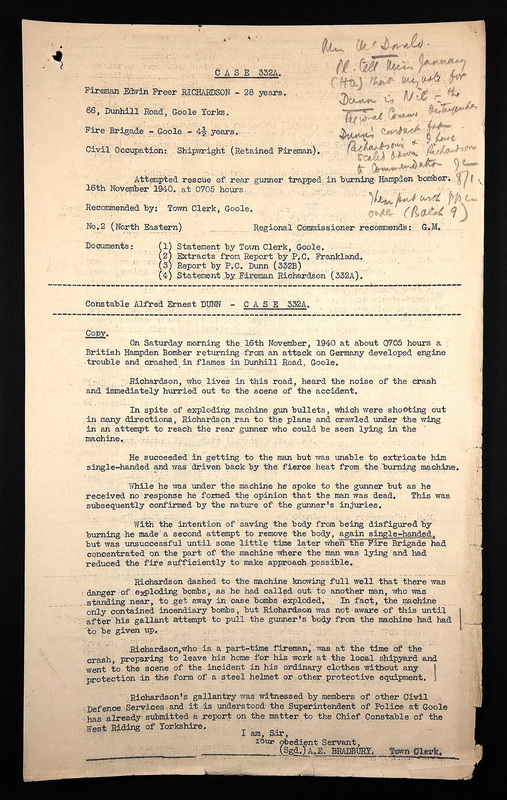